The Rise and Fall of the International Organization of Journalists Based in Prague 1946-2016. Useful Recollections Part III.

This is a unique history of what in the 1980s was the world’s largest association in the media field. However, the IOJ was embroiled in the Cold War: the bulk of 300,000 members were in the socialist East and developing South.

Hence the collapse of the Soviet-led communist order in central-eastern Europe in 1989–91 precipitated the IOJ’s demise. The author – a Finnish journalism educator and media scholar – served as President of the IOJ during its heyday. In addition to a chronological account of the organization, the book includes testimonies by actors inside and outside the IOJ and comprehensive appendices containing unpublished documents. 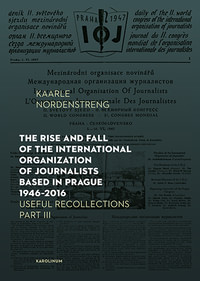