'The feeling that the very concept of objective truth is fading out of the world ... this prospect frightens me much more than bombs'
On the 70th anniversary of George Orwell's death, a new collection of his brilliant essays written during the Second World War
Fascism and Democracy collects five brilliant examples of Orwell's writing during the darkest days of World War Two.

Grappling with the principles of democracy and the potential of reform, the meaning of literature and free speech in times of violence, and the sustainability of objective truth, Orwell offers a compelling portrayal of a nation where norms and ideals can no longer be taken for granted. Like the best of Orwell's writing, these essays also serve as timeless reminders of the fragility of freedom. 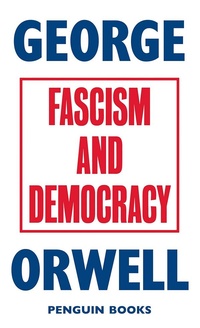