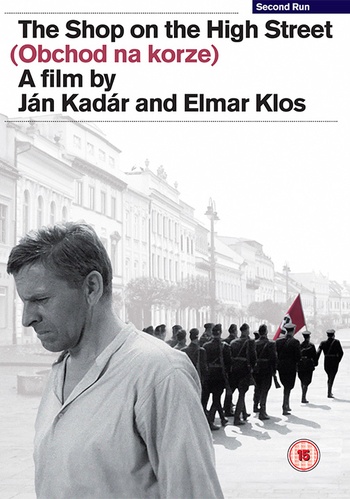 The Shop on the High Street (Obchod na korze) - DVD

Winner of the Oscar® for Best Foreign Language Feature in 1965, Ján Kadár and Elmar Klos’ The Shop on the High Street (aka The Shop on Main Street) is one of the cornerstones of World Cinema, and perhaps the most internationally renowned film in all Czechoslovak cinema. ‘Tóno’ Brtko, a poor carpenter, is appointed by his despised Nazi brother-in-law to be 'Aryan controller' of an old Jewish widow’s sewing shop in a Nazi-occupied Slovakia in 1942.

The widow, Rozalia (Yiddish theatre legend Ida Kamińska, nominated here for a Best Actress Oscar® for her performance) is near deaf, isolated and partially sighted, barely even aware of the war or able to comprehend the danger in which she lives. Believing Tóno is simply her new assistant, the two develop a friendship that sees him maintaining that fiction as he attempts to protect her from the encroaching Nazi horror. The Shop on the High Street is a complex tale of common lives disturbed and destroyed by war. Wonderfully written and performed, and with an extraordinary Zdenek Liška score, the film becomes a devastating examination of how minor compromises can finally lead to complicity in the horrors of tyranny. • Presented from a brand new High Definition transfer prepared by the Czech National Film Archive. • New, exclusive and expansive filmed appreciation by writer, editor and film historian Michael Brooke. • 20-page booklet featuring a substantial new essay by author and film programmer Peter Hames. • Original US press book. • New and improved English subtitle translation. 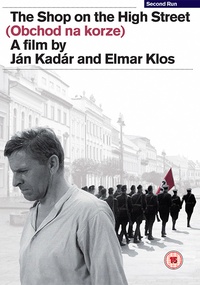