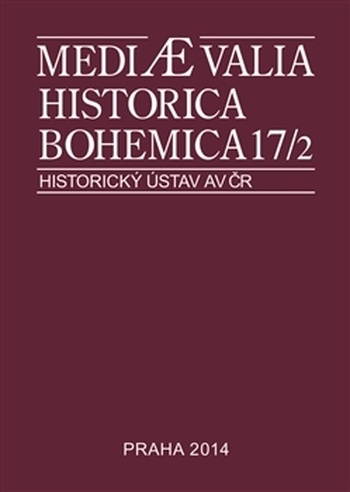 OBSAH I. Studie Dana DVOŘÁČKOVÁ-MALÁ: K možnostem výzkumu panovnického dvora v pozdním středověku v českých zemích / On the possibility of research of the sovereign court in the Late Middle Ages in the Czech lands (s. 7–16) - The study presents a synopsis of the existing scholarship on the theme of courtly research in the Czech lands, which has taken place in various qualities and quantities since the end of the 1970s. It summarizes the individual results and existing methodological routes while pointing out the as-yet untouched or insufficiently elaborated themes.

It predominantly points out the so-far minimal research in this sense in the Late Middle Ages, or in the 15th century, in the Czech lands. Among others, also a treatment of the court of the famous King George of Poděbrady here. Blanka ZILYNSKÁ: Dvůr krále Jiřího ve světle současného poznání / The Court of King George in Light of the Current Knowledge (s. 17–36) - The paper recapitulates the state of the treatment of the sovereign court of George of Poděbrady, briefly reminds the reader which sources are available and in the end discusses the individual themes associated with the court: the prosopography of the courtiers, chancellery, celebrations and patronage. It states mainly the little treatment of the personnel composition of the court society. Zdeněk BERAN: Katolické panstvo na dvoře Jiřího z Poděbrad. Procesy vzájemné konvergence a divergence / Catholic Lords at the Court of George of Poděbrady: A Mutual Process of Convergence and Divergence (s. 37–75) - The basic power centre was the sovereign court in the Poděbradian kingdom just like in the other medieval and modern monarchies. The court of George of Poděbrady in this study is seen from the structural-personnel perspective as the mutual ties of an arranged network of persons sharing along with the sovereign in the policy and administration of the land. The aim of the study is to capture the bilateral activity of George of Poděbrady with a group of upper aristocrats actively demonstrating their allegiance to the Roman Catholic Standard receiving Holy Communion under one species within the so-defined sovereign court. The mechanisms, which brought Catholics fully devoted to his political programme and person to the Poděbrady court, are examined in detail as well as the hidden pitfalls contained in the support of the Catholic nobility, who later abandoned George and formed a domestic opposition known as the Zelená Hora Unity. The work is structured into several mutually related levels analysing gradually the relation of estatism and confession in the Poděbrady period, the representation of the Catholics in the highest offices, their property situations, kinship ties, representation in the royal council and confrontation of the imperative of loyalty to the king and obedience to the pope. In this questioning, it is necessary to shift to the period before the royal election from March 1458 and note the early ties of George of Poděbrady with the Catholic nobility, remove the habitual evaluation leading to a condemnation of the “treacherous” Catholic nobility and simply not glorify those who remained with George of Poděbrady. Martin ŠANDERA: Dvůr Poděbradova syna Jindřicha Minsterberského. Stav výzkumu a úkoly bádání / The court of Poděbrady’s son Heinrich of Münsterberg: State of the research and research tasks (s. 77–112) - The paper characterizes the source base and summarizes the state of research of the court of Duke Henry of Münsterberg and outlines its future perspectives. Furthermore it describes Henry’s residence in Kladsko (Kłodzko, Glatz) and main sources of inspiration. Then it uncovers personal structure of the administrative and representative component of his court. Moreover it addresses the issue of material security of courtiers and servants, cultural level of the court and education provided to Henry’s children. The paper also pays attention to a large social and representative events of the spiritual and profane character and to significant participating guests. František MUSIL: Venkovská sídla Poděbradů / Rural residences of the Poděbrady family (s. 113–128) - The study does not note the court of the family from Kunštát and Poděbrady as a certain circle of persons active in the surroundings of the members of the family and sharing in its activities, but it notes mainly its Bohemian places (castles) with which the gradual rise of the family was connected. They include Poděbrady, which was the first Bohemian property and residence of a member of this family, further Litice nad Orlicí – a centre of the extensive progressively acquired properties of the family of Kunštát and Poděbrady in East Bohemia and where also the family archive was located and the castle no longer existent today in Kłodzko (it was part of Bohemia) connected with the penetration of the family into Silesia. It marginally deals with the issue of the share of George already as king in the fortification of the family Moravian castle of Kunštát. II. Diskuse, názory a inspirace Jaroslav BOUBÍN: Několik poznámek ke kartotéce Augusta Sedláčka / Some notes on the card file of August Sedláček (s. 131–144) - The study discusses the card file, which is part of the written estate of the important Czech historian August Sedláček (1843–1926) and is a unique and extraordinarily extensive file of more than 400,000 index cards. The study deals with the question of the ratio of the card file to the printed work of A. Sedláček and reminds of the advantages of its digitization. Josef ŽEMLIČKA: K využitelnosti Sedláčkových Hradů a zámků po 100 letech. Ohlédnutí za velkým historickým projektem / On the utility of Castles and Chateaux 100 years later. Looking back at the great historical project (s. 145–157) - August Sedláček is correctly considered to be the founder of Czech research of medieval castles. His monumental work “Castles, Chateaux and Strongholds” has been the main source of knowledge to this day. The study deals not only with Sedláček’s contribution to the history of Czech castles, but also notices the external literary form of his work. It shows us August Sedláček as a perceptive observer and reliable guide in the description of individual castle localities. Furthermore, also the importance of Sedláček’s card file for today’s generation of researchers and the utility of its digitization is underlined in the article. III. Literatura Vratislav VANÍČEK, Svatý Václav. Panovník a světec v raném středověku, Praha 2014 (Jan Tomášek) (s. 161–165) Jeden den ve středověku, Martin Nodl – Petr Sommer (edd.), Praha 2014 (Anna Košátková (s. 165–167) Bonifác HOLUB, Paměti farnosti u svaté Markéty v Břevnově a blízkého okolí, Ondřej Koupil – Anselm Křivánek (edd.), Praha 2014 [= Pietas benedictina 21] (Jindra Pavelková) (s. 167–168) 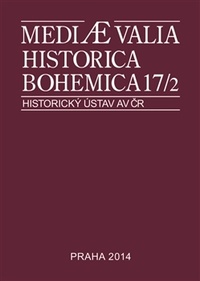